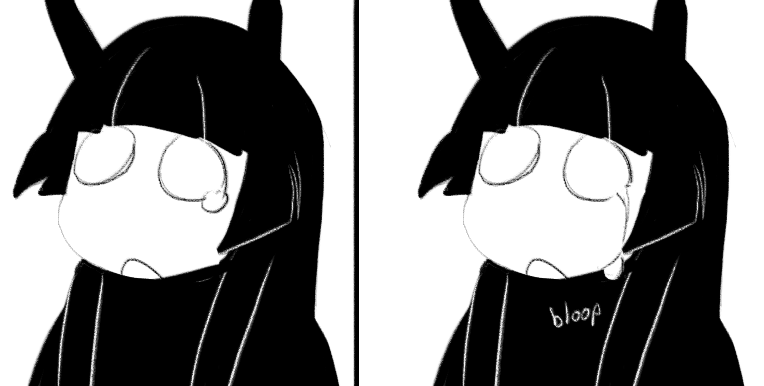 
It had been a cold evening that day, like every day some might say. Snowy and breezy, especially cold for a little black clad himehorn, with only her little cloak and a handful of eggs for her to claim her own.

She walked down the deserted streets offering her eggs. "Please, take an egg. I only want some food, or if you could, some cake." She said to the few nohorns who to passed by. All on their way to meet their peers, on New Year's Eve. Again and again she tried to no avail, only met by cold stares. "Go back to your herd!" They said. Little they knew, she had no herd.

Now alone in the dark streets, she tried to find a place to pass the night and in a little alleyway she had to get by. Nested in a corner she stretched her legs and she placed her eggs. Her too cold and not happy eggs.

Moving her little toes, she stared at her handful of eggs. Still and cold, she kept staring at them. Tapping one of them, the unthinkable happened. A lush greenery appeared in front of her, full of happy eggs.

She smiled overjoyed, feeling the grass under her feet. She looked around amazed at the view, the view that a mere hours before had been in front of her, as if nothing had happened. "Had been all this a dream?" She asked herself, as she tried to touch a happy egg.

Before her hand reached its goal, the greenery disappeared and the happy eggs with it. Confused, and disappointed, she longed for more.

One more time, she tapped one of the eggs. This time, baskets over baskets overflowing with food and toys. Happy smallhorns eating and playing all around and even her favorite toy. A little horned cow, her pride and joy, but this time it banished sooner than before.

One more time, with her last egg, she tapped with hope, and the tall haremhorn that took care of her mere hours before stared at her from above. Stretching her arms, looking for a hug.

Touching her with her fingers, something inside her broke. She leaped at her bosom, hugging her and squeezed strong, filling her little herd shaped hole, crying like she has never done before.

The haremhorn nodded and carried her in her arms, while the smallhorn asked for her warmth. Crying herself to sleep, dreaming of happy times, everything went black...

A sweet smell and a pleasant warmth brought her back, making her open her eyes. Fuzzy her vision, she soon adjusted her eyes and soon a nohorn came by.

"N-no horn, go home." She said with fear in her eyes. "...but this is my home, little himehorn. Why were you out there? Can't you go home?" The nohorn replied.

"I can't... The nohorns took it away." She said with tears in her eyes. "I see." The nohorn replied, as he got up and went to the door.

She heard a metallic noise and accepted her fate. She tried to get up and tears fell. Too weak to move, she collapsed where she stood. She braced herself for the worst. The view that awaited her was not of an opened door, but of the nohorn.

Placing a little tray in front of her, a cup of chocolate and a little cake were there. "You can stay." He said, and she thought it was too good to be true. "I was alone too." His smile grew. "Now you're home, himehorn." Torn, she cried, and then he cried too.